What is
Autogenic Training?

Dr Johannes Schultz, a German neuro-psychiatrist, was AT’s developer, during the 1920s. He devised the method from his own patients’ reported and subjective experience of being hypnotised. Later he realised his questions and observations, and his self-administered technique was not hypnosis at all. It was something other: ‘autogenic’.

Autogenic Training can be described in several ways:

AT treats the whole person, not ‘just’ the problem.

First of all, we might think about what AT is not:

With its roots firmly in medicine, AT is a long-established form of treatment which addresses imbalance in mind and body. Many symptoms caused by inappropriate stress reactions over a long period of time, can be significantly helped or even eliminated by using AT.

Despite its unusual name, Autogenic Training (AT) really does describe the treatment. The word ‘autogenic’ comes from the Greek word autogenetos (αυτοπαραχθείσα), which means “originating from within the body”, “self-generated”, “self-produced”, “self-born”.  ‘Autogenous’ is a word commonly used in life sciences.

In summary, AT is a mind-body therapy, taught to, and then practised by, the client.

The passive observer attitude which is adopted during practice, opens us to perceiving the mind and body objectively so that we can take the position of casual witness.

Schultz described the move into the passive observing, witnessing stance as the ‘Umschalten’: the “Concentrative Experience of Switching Process” (Schultz, 1973, p322).
This can be translated into English in many ways: we shift, switch, change the channel, switch over. Some people, through the move to a witness stance, describe this as akin to a spiritual experience.

“The goal of Autogenic Psychotherapy is that the patient acquires the necessary skill as far as possible uninfluenced by the therapist, and is in this way able to form his own auto rhythm.” – Dr Heinrich Wallnöefer. 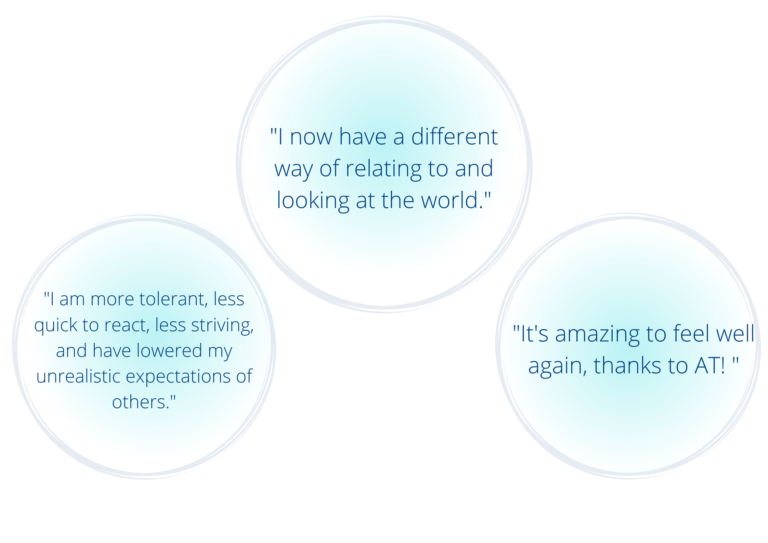